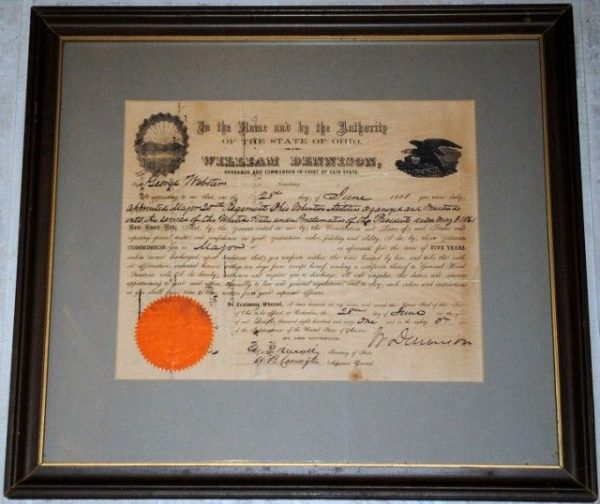 REFERENCE ONLY. (SOLD or NOT FOR SALE)

Original June 1861 Commission of Major George Penny Webster who served with the 25th O.V.I. until his promotion to Colonel when he served as commander of the 98Th Ohio Infantry…Col. Webster was killed in action at Perryville, Kentucky while acting as the 34th Brigade Commander on October 8, 1862  http://articles.centralkynews.com/2003-10-06/features/24898098_1_perryville-union-officers-battle/2.

With this commission is his Mexican War sword of 1796 Light Cavalry pattern that had descended through his family from the Civil War.

“Colonel George P Webster was born in Butler county Ohio removing to Hamilton in 1841 where he became county clerk He was admitted in 1846 and entered the Mexican war receiving a wound in his shoulder at the storming of Monterey He afterwards removed to Steubenville where lie served two terms as clerk of courts and became a partner of Martin Andrews who was a prominent attorney of this period On the outbreak of the Civil War he actively engaged in raising troops and became colonel of the 98th Volunteer Infantry While commanding the 34th Brigade Jackson's division McCook corps he was mortally wounded at the battle of Perryville Kentucky on October 8 1862 His funeral cortege was one of the largest ever seen in Steubenville.” from Bench and Bar in Northern Ohio By William B. Neff